skip to main | skip to sidebar

"We're both so messed up. I don't know which one of us is worse."
- Duane Bradley, Basket Case

Rock and Shock 2009: More Reasons to Love the Italians!

I'm just going to say it flat out: I absolutely love the Italians.

Allow me to explain. At the New Jersey Fangoria convention last June, my friends and I decided to go to the ATM across from the hotel we were staying at in Secaucus that Saturday night (I'm guessing probably for bar money). On our way back inside, we saw a girl getting out of a taxi van with Ruggero Deodato, Lamberto Bava and Sergio Stivaletti, as well as horror journalist Paolo Zelati. Not one to miss this golden opportunity, we started to make pleasant small talk with these legends (minus the girl, of course) while they smoked their cigarettes. To our surprise, Deodato and Stivaletti stayed outside and talked to us for more than an hour! Sure, they barely spoke any English, but Zelati helped translate, and it wasn't always needed - for example, Deodato was more than capable of explaining his disdain for Giovanni Radice without the help of an interpreter.

To say it was one of my most memorable moments as a horror fan is an understatement, and I'll truly never forget that night (see the pic below of my friends and I with Zelati). What makes it even better is they actually remembered us the following day; on Sunday I went over to their table again to thank them for taking the time to hang out, and Stivaletti gave me a hand-drawn sketch of the killer from Dario Argento's Phenomena. It's still one of the coolest damn things I own. 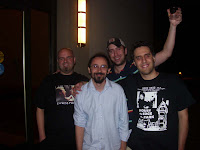 The reason I've recalled this story is because from that fateful June weekend on, I told myself I'd go out of my way to attend any type of Italian horror-related event I possibly could. And as luck would have it, this past weekend's Rock and Shock in Worcester featured a "Lucio Fulci Remembered" panel Saturday afternoon. While I didn't become as personally invested in it as my experiences last summer, it was still the highlight of the convention for me.

The panel included Catriona MacColl (City of the Living Dead), Al Cliver (The Beyond) and Ottaviano Dell'Acqua (Zombie). MacColl, who still looks beautiful for her age, knew the most English and as a result had the most to say. She spoke on such topics as her amicable relationship with Fulci in spite of his ill feelings in general towards women. MacColl also talked about working with other actors such as John Warbeck, and how she dealt with the excessive violence in Fulci's scripts.

Cliver had a little more trouble with the language barrier, but seemed genuine in his answers when he could explain himself. He delved into Fulci's unfortunate family history (one wife died, the other divorced him; one of his daughters was a drug addict), but also spoke of his humorous side, often giving actors on the set nicknames (though he couldn't remember what Fulci used to called him).

Last but certainly not least was Dell'Acqua, who knew almost no English, and as a result was the funniest. He gave mostly one word answers or just nodded his head and laughed, which I was charmed by, even though he kind of shrugged off my question for him ("Have you ever been seriously injured during your career?" "Knees.") As a stunt man in more than 300 films, he still works today in movies all over the world - including the U.S., where he even doubles for Daniel Craig.

Although I wasn't wild about the moderator (I forget his name, but he used to work at Media Blasters, so go figure - the quality of his jokes were as good as his former company's DVD transfers), the panel itself was a delight and further cemented my belief that the Italians are simply fucking awesome.

The other panel I attended was for John Landis, which immediately followed the Fulci one. It was just as entertaining; Landis swore like a sailor but was refreshingly honest about his thoughts on Hollywood and major studios today (cliff notes version: they suck), as well as some of the disasterous experiences he had as a director (Beverly Hills Cop 3, Blues Brothers 2000). Unfortunately, he didn't talk too much about An American Werewolf in London, but Landis did make up for it by completely embarassing some asshole in the crowd who was trying to be funny, so his stock rose in my book.

After the panels I walked around the dealers' tables with my buddies, and after careful consideration picked up the Tromasterpiece edition of Redneck Zombies as well as a Deep Red and Re-Animator poster. No t-shirts this year, although there was an incredible Slaughter High one that I kinda regret not buying.

Some last observations about the convention:

1. Sig Haig had a constant line of 20 fans deep for the entire afternoon. Am I the only one that finds this odd?
2. Not that I've really seen any of his movies, but I was impressed with Doug Jones' (Pan's Labyrinth) repoire with fans; he gave everyone in his line a hug and kiss on the head, even the guys.
3. Malcolm MacDowell basically had his own wing for signings. Not that he didn't deserve it, but I'd like to have slapped the pen out of his hand if he was personalizing anything Halloween 2-related.
4. One minor gripe: Why can't guests charge $10 for an autograph instead of $20?
5. One major gripe: Why on earth would you have a Friday the 13th remake panel??? Derek Mears seems like a nice guy, but come on, American Olivo and Arlen Escarpeta fielding questions from the audience?? I can promise you all I didn't stick around for that.

In short, I had a great time at Rock and Shock 2009. It was really nice not having to drive through Connecticut or worry about accidently taking the George Washington Bridge, and I feel like I got my money's worth. Let's hope 2010 brings more of our Italian friends back to New England, or at least Frank Henenlotter - that's not asking for too much, is it?
Posted by SB at 9:33 PM


Matt and I with Eric Red (director of Body Parts) last June!